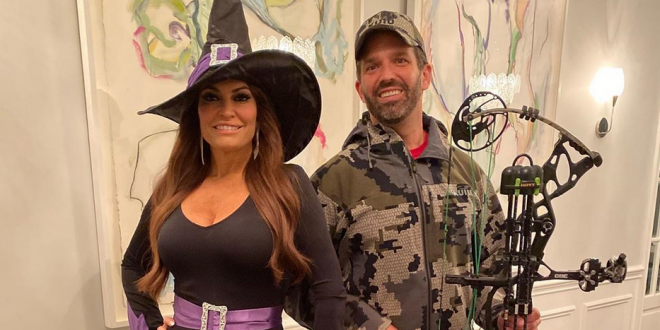 Junior And Mistress Go As “Witch Hunt” For Halloween

Donald Trump Jr. is using Halloween as an opportunity to take a jab at the Democratic party and the impeachment resolution that passed on Thursday with a costume inspired by an oft-quoted phrase that his father uses on Twitter.

Trump Jr., 41, shared a pair of photos on Instagram on Thursday, revealing a politically tinged couples costume with girlfriend Kimberly Guilfoyle. In the snaps, Trump Jr. wears a camo hunting outfit complete with what appears to be an actual bow and arrow set, while Guilfoyle, 50, wears a black and purple witch costume — together, they make up a “witch hunt.”

“Witch Hunt!!! Happy Halloween folks! With all the bulls⁠it the Democrats are throwing out there we just couldn’t resist,” he wrote in the caption for the post.

Witch Hunt!!! Happy Halloween folks! With all the bullshit the Democrats are throwing out there we just couldn’t resist. #witchhunt #halloween #halloweencostume #trickortreat @kimberlyguilfoyle