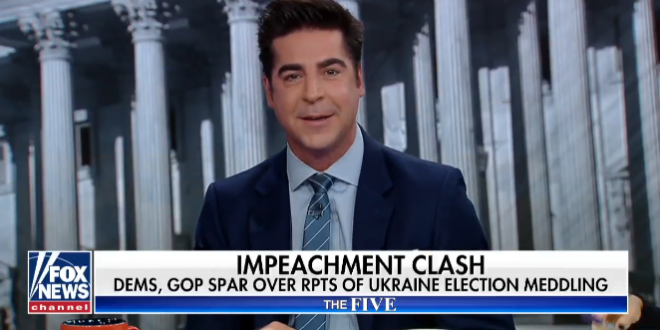 “The hoax is over. It’s done. This whole thing is up in smoke. I mean, you guys tried, you failed. You didn’t have one witness to testify that Trump directed a quid pro quo involving military aid. Not one. So let’s go home, let’s just forget it all happened. Nancy Pelosi wasted everyone’s time.

“What did she do in 2019? She got bullied by AOC, she shut down the government and then she failed to impeach the president. We’re going to look back at 2019 like what? You did nothing. No NAFTA renegotiation, no drug prices, no infrastructure.

“What happened today? Someone overheard a phone call. So what? He eavesdropped? The president said I don’t give a blank about Ukraine. Well, neither does the country.” – Fox host Jesse Watters, in a clip tweeted out last night by his Glorious Leader.

The hoax is OVER. It’s done. They tried and failed. They didn’t have one witness to testify that President @realdonaldtrump directed a Quid Pro Quo involving military aid. Not one! #TheFive pic.twitter.com/kwzSUp953P