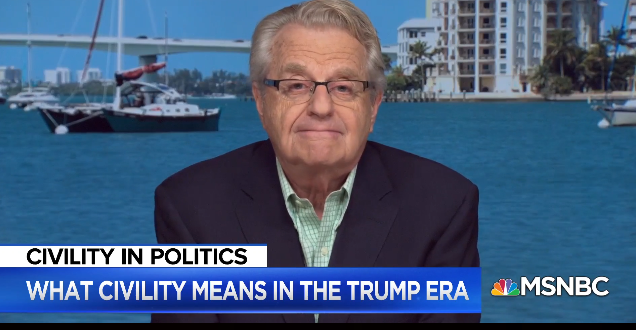 Jerry Springer: My Show Would Have Bleeped Trump

“When you have the president of the United States using language that even on our crazy show we’d bleep out, then society’s in trouble. Do you want to start bleeping out the president of the United States during his speeches? Whether they’re government leaders, economic leaders, religious leaders — when they misbehave, when they say the norms don’t matter, when they say you can use whatever language you want … once we do away with civility in terms of our institutions, we’ve lost it.” – Jerry Springer, speaking to MSNBC.

“I used to joke and say that my anger at the president is that he took my show and brought it to the White House,” Jerry Springer said on MSNBC. https://t.co/CrJqJnmToJ