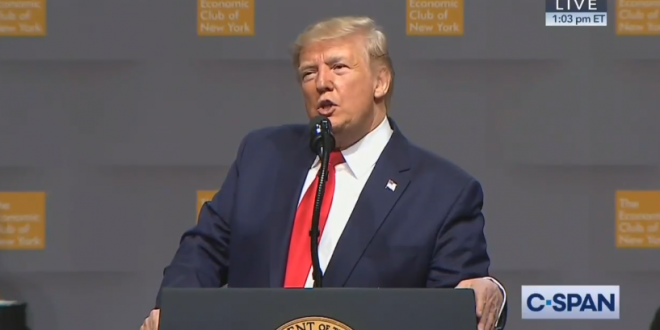 At a speech to the Economic Club of New York today, President Trump declared that his daughter, Ivanka, has personally created 14 million new jobs. The president announced this figure — so astonishingly ludicrous it would embarrass a Stalin-era pronouncement — and then repeated it twice more as the crowd applauded politely.

The entire U.S. economy has created fewer than 6 million new jobs since Trump took office. So Trump is crediting his daughter with having personally created more than 200 percent of all new jobs in the United States. This is like supply-side economics but for authoritarian nepotism.

“14 million and going up,” he adds. pic.twitter.com/7E8uSEgjtL

Trump said in New York this morning that he created a record 7 million new jobs. But that’s less than Obama did in his first 3 years.

Then he said that Ivanka Trump created 14 million jobs in 3 years? WTF?

Trump falsely/nonsensically claims Ivanka Trump has "created 14 million jobs" through the Pledge to America's Workers. These are education and training opportunities, many of them for existing employees and many planned before/entirely independent of the Pledge.