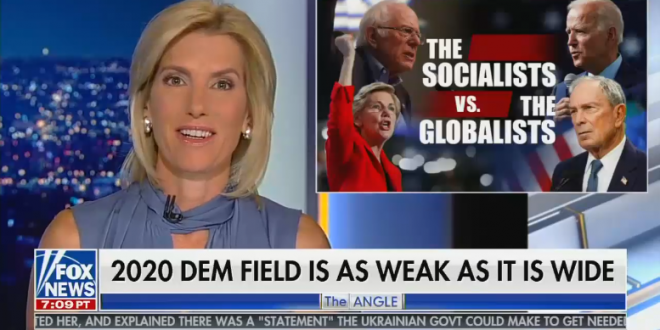 “Europe is running away from socialism, America’s going to run toward it? Okay, and then what? Hope for better employment numbers, a higher GDP? Unlikely. And, by the way, the new populist party in Spain just doubled its numbers in parliament over the weekend there.

“And nations from Sweden to Greece are rebelling big time against the wave of Middle Eastern refugees that genius Angela Merkel punished the E.U. with four years ago. So, leave it to America’s Democrats to side with the parties losing clout in Europe.

“The choice we have next election is between preserving our booming economy, our history and our heritage, the good and bad of it, and reversing, or reversing and repudiating all of that.

“On this Veterans Day, we honor all of those who served armed forces over the years. And I don’t think they sacrificed so that the rest of us could fritter it all away on a socialist or a globalist power grab that delivers nothing but pain and misery.” – Laura Ingraham, last night.