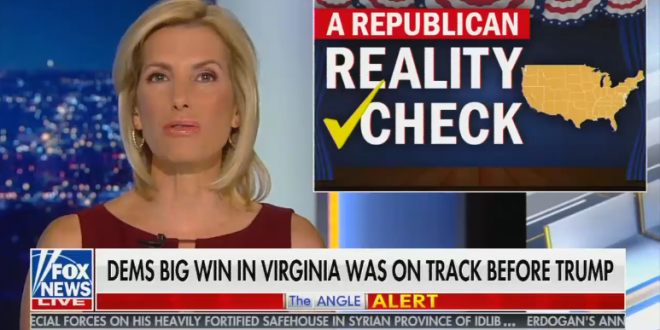 “Since immigrants are more likely to vote Democrat, well, this, of course has dragged the electorate to the left. That’s just a fact of life. But the shift left has also been aided by women, especially in the suburbs who tend also to vote Democrat. This is something Trump absolutely needs to pay attention to and not just wave it away. It is impossible to do that.

“Also, two weeks ago, we warned you about another factor that’s important to note in this Virginia race, and it should jolt Republicans into action themselves.

“In this cycle, huge amounts of outside money flowed into Virginia’s local elections. George Soros pumped millions in to elect commonwealth attorneys who pledge to radically change how we prosecute crime in the commonwealth, prioritizing so-called social justice concerns over public safety.” – Laura Ingraham, on last night’s Fox News episode.