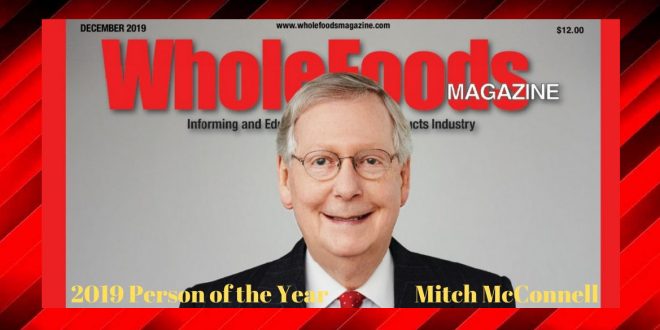 Whole Foods Magazine has an announcement:

“Hemp hero,” “Cannabis champion,” “climate villain”… U.S. Senate Majority Leader Mitch McConnell has been called all this and more. Odds are, you have an opinion about the Republican senator from Kentucky, and regardless of whether that opinion is positive or not, one thing is certain: Mitch McConnell has done a tremendous amount to influence the natural products industry in 2019, and what he has set in motion will continue to impact this industry for a long time to come.

CBD is the buzzword of 2019—in part because of work McConnell started years ago. His first big move on hemp came in 2014, when he spearheaded a provision to legalize hemp pilot programs in the Farm Bill. In the years that followed, research demonstrated the potential of hemp as an agricultural commodity, and McConnell made another big move: In 2018, he introduced The Hemp Farming Act of 2018 to legalize hemp as an agricultural commodity and remove it from the list of controlled substances.

“We have no relation to Whole Foods Market.”

Honored to be named @WholeFoodsMag 2019 Person of the Year. I was recognized as the most influential person in the natural products industry, specifically because of my work to legalize industrial #hemp for farmers in Kentucky and around the country. https://t.co/Nu9ZZLs1pZ pic.twitter.com/xB6PbkQe9G

Previous Trump Moves To Cut US Contribution To NATO Budget
Next DOJ Report: The FBI Never Spied On Trump Campaign