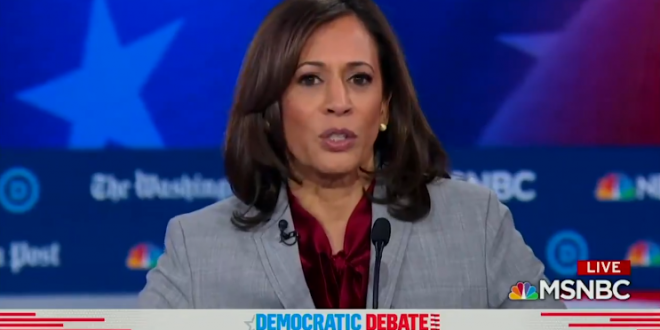 In a withering response to Rep. Tulsi Gabbard’s defense of characterizing former presidential nominee Hillary Clinton’s leadership as the “personification of the rot that has sickened the Democratic Party,” Sen. Kamala Harris ran through a laundry list of Gabbard’s perceived offenses against both party and country, characterizing the Hawaii congresswoman as an opportunist who has cozied up to white nationalists, dictators, and perhaps most damningly, President Donald Trump.

“I think that it’s unfortunate that we have someone on this stage that is attempting to be the Democratic nominee for president of the United States, who during the Obama administration spent four years full time on Fox News criticizing President Obama,” Harris said, prompted to respond to Gabbard’s remarks. If anyone on the stage should be condemned as a poor reflection on the party, Harris continued, it should be Gabbard herself.

Tulsi Gabbard accused the Democratic Party of having the same views on war as George W. Bush and Donald Trump.

Tulsi Gabbard once said Hillary Clinton was the “personification of the rot that has sickened the Democratic party.” She elaborated tonight on what she meant by the “rot” before Kamala Harris took a swipe. Watch:https://t.co/l8SRQ7wyuR pic.twitter.com/pXfO2Y0X1t

Previous CHATTER AWAY: Overnight Open Thread
Next Booker Blasts Biden On Legal Weed: Were You High?