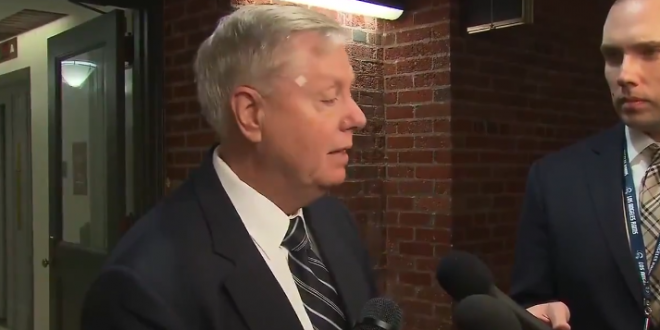 Well, it wasn’t the most flattering defense. While Rep. Mark Meadows (R-N.C.) has said it’s actually becoming easier to defend President Trump amid the congressional impeachment inquiry, Sen. Lindsey Graham (R-S.C.) had to dig deep to do so on Wednesday.

Graham seems fed up with the whole thing, saying on Wednesday that he won’t read any of the newly released transcripts because the whole thing is “a bunch of B.S.”

Graham said one of the reasons he doesn’t think President Trump deserves to be impeached is because there’s little chance the Trump administration was savvy enough in the first place to come up with the idea of withholding military aid from Ukraine in exchange for Kyiv publicly announcing anti-corruption investigations.

Sen. Lindsey Graham — defending Trump — now says the president and his aides “seem to be incapable of forming a quid pro quo,” because their policy toward Ukraine was so “incoherent.”

“It was incoherent,” Sen @LindseyGrahamSC
says of Trump’s Ukraine policy.

“They seem to be *incapable* of forming a quid pro quo.” pic.twitter.com/rdZxyIazNj

“I’m not going to read these transcripts,” Sen. Lindsey Graham says of transcripts of depositions from House impeachment inquiry. “The whole process is a joke…I’m not going to legitimize it.” https://t.co/WNXETHmJYy pic.twitter.com/5uap2IUChr

New Trump defense today from @LindseyGrahamSC – too bumbling to commit a crime: “What I can tell you about the Trump policy toward the Ukraine, it was incoherent, it depends on who you talk to. They seem to be incapable of forming a quid pro quo.”