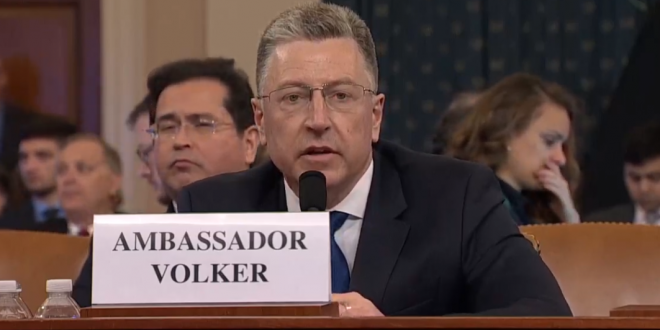 GOP Witness Volker Turns Out To Be Disaster For GOP

The former special U.S. envoy for Ukraine was the first impeachment witness to testify behind closed doors and assured lawmakers he saw no indication that President Donald Trump had conditioned a White House meeting and military assistance for Ukraine on a promise from the country’s president to investigate Trump’s political rivals.

But after a cascade of witnesses told lawmakers a far more troubling version of events — that Trump indeed seemed to be orchestrating a quid pro quo for the White House meeting and perhaps for military aid — Volker says he has a new perspective.

In perhaps one of the most glaring updates to his earlier testimony, Volker said that during a July 10 meeting at the White House with top Ukrainian officials, he now recalled that Sondland made a “generic comment about investigations” and that “all of us thought it was inappropriate.”

Volker calls the allegations against Marie Yovanovitch and Joe Biden not credible: “It’s just not credible to me that a vice president of the United States is going to do anything other than act as how he sees best for the national interest.” pic.twitter.com/vbrfP6HYXI

Volker: “The accusation that Vice President Biden was acting inappropriately didn’t seem at all credible to me.”

Reminder: This is the GOP’s witness.

Just read Volker’s opening statement. Definitely NOT the witness Republicans were hoping for. Blows apart the Trump claim Biden did something wrong. pic.twitter.com/pY6uL5WB3S

“I have known Vice President Biden for 24 years. He is an honorable man and I hold him in the highest regard.” pic.twitter.com/8X6jMRSZVc