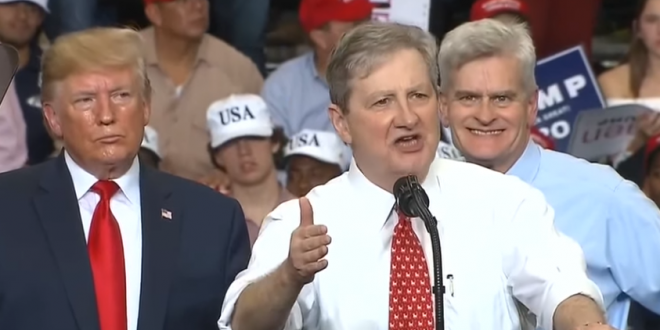 GOP Senator On Pelosi: It Must Suck To Be That Dumb

Kennedy defended the president against the impeachment inquiry, slamming House Speaker Nancy Pelosi for launching the probe. “I don’t mean any disrespect but it must suck to be that dumb,” he said of Pelosi. Among the guests Trump brought on stage were Duck Dynasty stars Willie and Phil Robertson.

How far down Trump has taken us: a sitting U.S. Senator – @SenJohnKennedy said this tonight at a Trump rally about Speaker Nancy Pelosi
“I don’t mean any disrespect but it must suck to be that dumb.”

How can this cellar dwelling be acceptable to anyone in the U.S. Senate?

John Kennedy just said of Pelosi trying to impeach Trump: “it must suck to be that dumb”

This is what “sucking up to Trump” looks like. Pathetic. Corrosive. Cruel. Ignorant. https://t.co/TPYBNCxL3I

Previous REPORT: Trump Wanted Barr To Hold Press Conference Declaring That He Broke No Laws With Call To Ukraine
Next Trump Rages: “We Don’t Have Freedom Of The Press!”