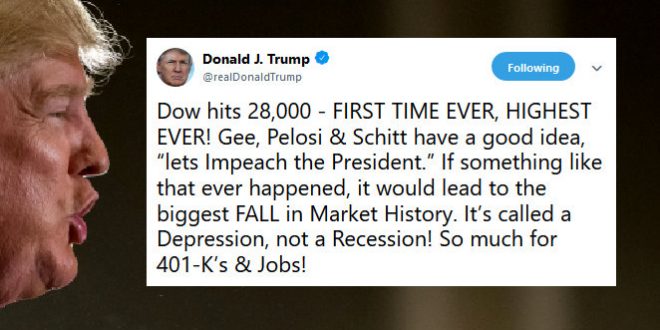 President Trump attacked Democrats on Twitter this morning and threatened an economic depression if he is impeached. The three major US stock indexes rallied to fresh record highs Friday, as investor sentiment was helped by hopes for a US-China trade deal and better-than-expected retail sales. The Dow rallied above 28,000 points for the first time ever. The first public impeachment hearings also took place last week.

Dow hits 28,000 – FIRST TIME EVER, HIGHEST EVER! Gee, Pelosi & Schitt have a good idea, “lets Impeach the President.” If something like that ever happened, it would lead to the biggest FALL in Market History. It’s called a Depression, not a Recession! So much for 401-K’s & Jobs!