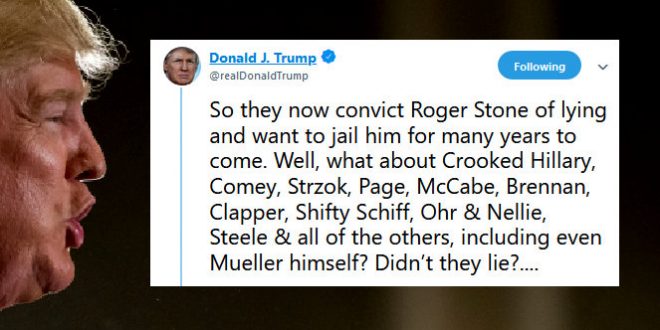 Roger Stone, a self-described political trickster, was convicted of all seven criminal counts that he faced at his trial in U.S. District Court in Washington, D.C.: obstruction of proceedings, five counts of false statements, and one count of witness tampering. Trump blasted the verdict, suggesting it was a “double standard like never before seen in the history of our country.”

Judge Amy Berman Jackson set Stone’s sentencing for February 6. The witness tampering count against Stone is the most serious charge, carrying a maximum sentence of 20 years in prison. But Stone is likely to receive a sentence less severe than the maximum, given federal sentencing guidelines. Stone was released pending his sentencing. Prosecutors had asked for him to be detained.

So they now convict Roger Stone of lying and want to jail him for many years to come. Well, what about Crooked Hillary, Comey, Strzok, Page, McCabe, Brennan, Clapper, Shifty Schiff, Ohr & Nellie, Steele & all of the others, including even Mueller himself? Didn’t they lie?….

….A double standard like never seen before in the history of our Country?