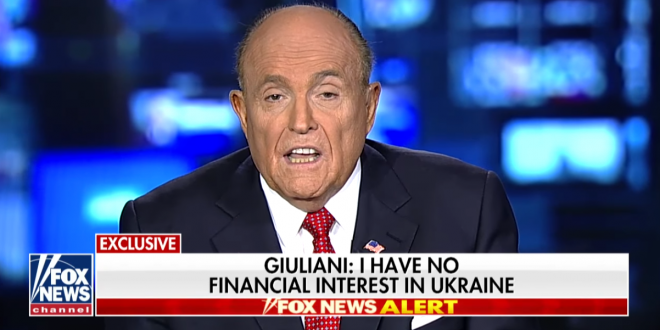 Giuliani: I Have “Insurance” To Keep Trump Loyal And My RICO Files Will Be Released If I Should “Disappear”

President Donald Trump’s personal lawyer Rudy Giuliani gave a wide-ranging interview on Saturday in which the former New York City mayor attacked numerous figures involved in the impeachment hearings and claimed for the second time to have “insurance” when questioned whether the president would remain loyal to him.

“I’ve seen things written like he’s going to throw me under the bus,” Giuliani said in an interview with Fox News’ Ed Henry about the characterizations and comments made in the media about him and his relationship with the president. “When they say that, I say he isn’t, but I have insurance.”

Hours later, Giuliani claimed on Twitter that the insurance policy he was referring to consisted of “files in my safe” that allegedly show ways former Vice President Joe Biden’s family had been “monetizing” his decades in office. These files would apparently become public if Giuliani were to “disappear,” he said in the tweet.

The statement I’ve made several times of having an insurance policy, if thrown under bus, is sarcastic & relates to the files in my safe about the Biden Family’s 4 decade monetizing of his office.

If I disappear, it will appear immediately along with my RICO chart.