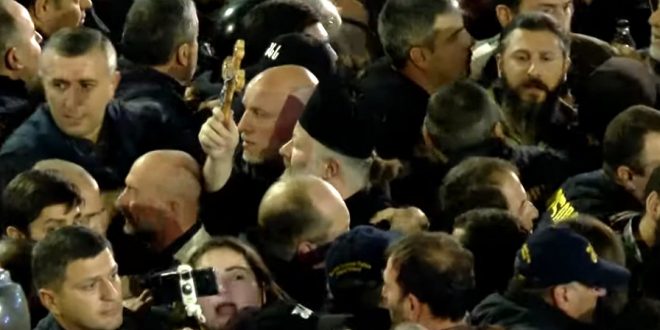 Police in Georgia said on Saturday they had arrested more than 25 people after ultra-nationalist protesters attempting to derail the premiere of an award-winning movie about gay love clashed with security forces. A few hundred demonstrators blocked the road outside a cinema in the capital’s city center on Friday ahead of the first screening of “And Then We Danced”, which tells the story of two young male Georgian ballet dancers falling in love.

Chanting “Long live Georgia” and “Shame”, the protesters – some holding crosses and religious icons – tried to force their way inside the cinema but where held back by riot police. “This is not just a movie. This is an insult to our faith, our traditions and all that is holy for us,” said Guram Damenia, who came dressed in a traditional Georgian costume. The movie premiered at the Cannes film festival in May and has won awards at festivals around the world.

Sandro Bregadze, a former junior minister in the ruling Georgian Dream party’s government, said earlier this week that his nationalist Georgian March organization would not allow the film to be showed in Tbilisi, calling it “propaganda of sodomy.”

“Some far right groups and the Church have basically condemned the film and are planning to stop people from entering the sold-out screenings,” the film’s director Levan Akin, a Swede with Georgian roots, wrote on his Facebook page earlier on November 8.

Last year a ban on same-sex marriage was added to the national constitution.

Around 80% of Georgia’s 3.7 million residents belong to the Georgian Orthodox Church,