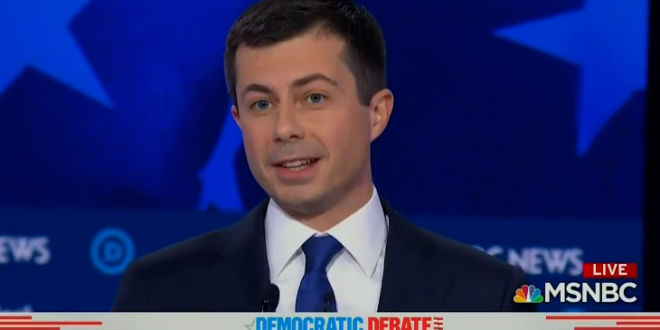 Front Runners Give Mayor Pete A Pass At Dem Debate

Pete Buttigieg came into Wednesday night’s debate bracing for an onslaught that never came. Yes, Amy Klobuchar and Tulsi Gabbard questioned his experience. Cory Booker dinged the young mayor’s resume, pointing out that he’s the “other Rhodes Scholar mayor on the stage” and warning voters against picking a Democratic nominee with an “inauthentic” connection to African American voters — a bloc that has largely ignored Buttigieg’s campaign so far.

But Kamala Harris declined a served-on-a-platter chance to hit Buttigieg again over a recent campaign misstep involving a stock photo of black people, instead pivoting to her own case for the Democratic nomination. And Joe Biden, Elizabeth Warren and Bernie Sanders, who remain packed together at the top of recent Iowa and New Hampshire polls alongside Buttigieg, didn’t take him on at all.

As you’ll see, Buttigieg did tangle with Gabbard.

Pete Buttigieg, the new Democratic front-runner in Iowa, did not come under much fire during the debate. “It could actually be a little condescending… [other candidates] see him as a threat in those states but not in the overall field,” says @JohnAvlon.https://t.co/OxGgv3Zc3E pic.twitter.com/zGcrpt9Dcz

.@PeteButtigieg says #DemDebate should have touched on Trump’s pardoning of war criminals: “I can’t think of something worse for the military than a president who equates being a war fighter with being a war criminal…That’s a slander against the uniform and against the flag.” pic.twitter.com/0szuZk8aEp

Previous Booker Blasts Biden On Legal Weed: Were You High?
Next Trump Lies About Apple Plant That Opened In 2013