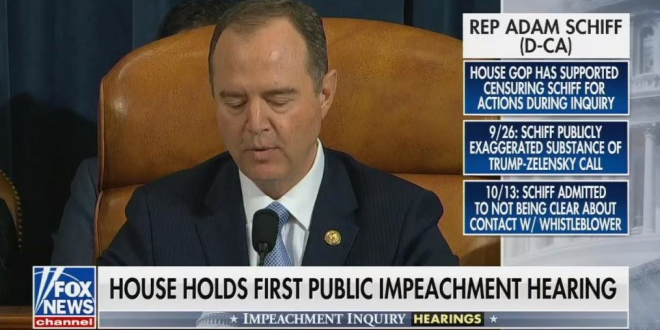 Fox News faced a creative challenge for its coverage on the first day of public impeachment inquiry hearings by the House Intelligence Committee: How could the network slant its coverage while running a live video feed of the testimonies? But give credit where it’s due: They’ve found a way. Fox’s programming has now featured commentary in the text chyrons denigrating key figures in the probe and continuing to advance the debunked narrative of false accusations against Democratic presidential candidate Joe Biden.

Early on, for example, we learned that committee Chairman Adam Schiff (D-CA) has “publicly exaggerated” the phone call between President Donald Trump and Ukrainian President Volodymyr Zelensky. And in a series of messages in the bottom news ticker section, the network showed debunked accusations against the Biden family — a mainstay of Fox News coverage — while the witnesses themselves laid out political corruption by the Trump administration.