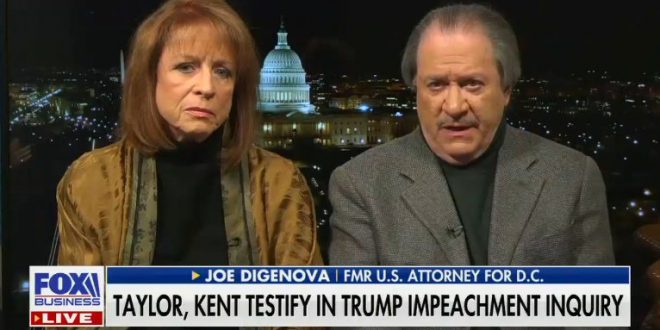 “There’s no doubt that George Soros controls a very large part of the career foreign service of the United States State Department. He also controls the activities of FBI agents overseas who work for NGO’s, work with NGO’s. That was very evident in Ukraine. And Kent was part of that. He was a very big protector of Soros. His testimony today showed this, kind of, stern sort of discomfort with not being included in certain discussions.

“But the truth is, George Soros had a daily opportunity to tell the State Department through Victoria Nuland what to do in the Ukraine. And he ran it, Soros ran it. He corrupted FBI officials, he corrupted foreign service officers.

“And the bottom line is this, George Soros wants to run Ukraine and he’s doing everything he can to use every lever of the United States government to make that happen, for business interests, not for good government business.” – Joe DiGenova, last night on Lou Dobbs’ show.

DiGenova recently on JMG when he claimed without evidence that Robert Mueller planted his cell phone in the Oval Office to secretly record Trump. DiGenova and his wife were to join Trump’s legal team last year but withdrew over unspecified conflicts of interest.