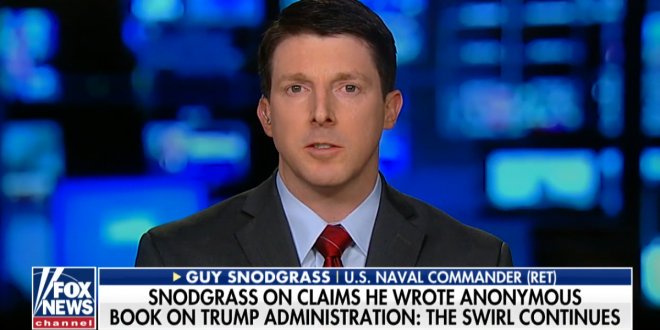 Former James Mattis speechwriter Guy Snodgrass appeared live on Fox News to address questions about if he is Anonymous – questions that he completely dodged and gave no concrete answer.

It was reported earlier today that Snodgrass was the Anonymous official who wrote an op-ed and book blasting President Donald Trump. Trace Gallagher asked Snodgrass point-blank if he is, in fact, Anonymous on Fox News Reporting Monday. “Are you anonymous?” Gallagher asked.

“Great question,” Snodgrass responded. “I have a book out with my name on it called Holding the Line. I do appreciate that the New Republic said the writing was excellent across both books, but if I was going to make an announcement like that I would come into the studio with you in New York City.”

I read the New Republic piece early this morning and the columnist seems to have a compelling case.

This @newrepublic piece posits that former Mattis aide Guy Snodgrass is “Anonymous.” I sent the article to Snodgrass, who texted back, “Fun.” When I pressed him on whether it was true, he replied, “No comment at this time.” https://t.co/yHDClvhjRw

Previous Trump Defends His Pardons For War Criminals: These Are Tough People And We’ll “Protect Our Warfighters”
Next Border Patrol Nixed Flu Shots For Detained Migrants