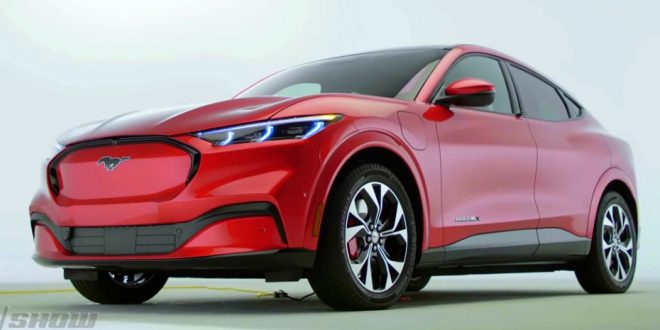 Ford took its time. But for its first electric vehicle, the 116-year old automaker did something a little controversial. The Mustang Mach-E is an all-new, fully-electric crossover that Ford says is part of the “Mustang family.”

That means it has some styling cues from the famous pony car, but that’s about it. It’s not a coupe, convertible, or special edition Mustang like the Bullitt edition.

The Mach-E will come in a few flavors when it arrives in showrooms in late 2020. There will be available standard and extended-range battery options with either rear-wheel drive or all-wheel drive, using permanent magnet motors – the same kind used in the Chevy Volt and Tesla vehicles.

European luxury-car makers like Jaguar, Audi and Mercedes-Benz have added electrified models — all S.U.V.s. Tesla, which has a fervent following, is on track to sell about 360,000 cars this year and is supposed to add a fourth model, a crossover vehicle, next year.

But with the Mustang Mach E, unveiled Sunday and coming to showrooms next year, Ford is aiming to make an even bigger splash.

It is taking a calculated risk that automakers can find a market for electric vehicles of the size Americans have come to prefer. (Almost half the nation’s auto sales now are S.U.V.s.) And it aims to persuade buyers to pay extra for battery power in an age of cheap gasoline.

“It’s a risky move, as slapping the badge on a futuristic, emission-free, sport-utility vehicle is about the last thing that Mustang loyalists are expecting,” said Michael Harley, executive editor at Kelley Blue Book.

“If the vehicle is outstanding and well-received, Ford will win big. If it falls short, the company will have another Edsel on its hands.”

There is no sign that Ford will stop producing the Mustang coupe, which is certainly the automaker’s most iconic model worldwide. Ford recently introduced the Shelby GT500, a supercharged 760-horsepower Mustang that is the most powerful factory-produced car the company has ever made.