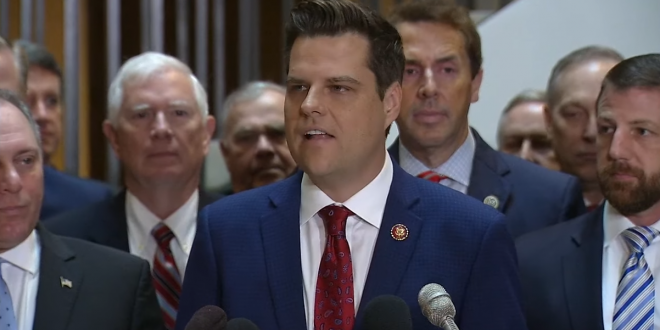 FLORIDA: GOP Rep. Matt Gaetz Tells Judge He Wants Prison Time For Woman Who Threw A Drink On Him

Rep. Matt Gaetz is asking the federal court to sentence Amanda Kondrat’yev — the woman who threw a drink on the congressman after a Pensacola campaign event in June — to “some time of incarceration,” saying that the message needs to be sent to supporters and opponents that violence won’t be tolerated.

Kondrat’yev, 35, is scheduled to be sentenced on Nov. 18 after pleading guilty in August to the charge of assaulting a U.S. congressman. She admitted to throwing a cup full of red liquid at Gaetz as he was leaving the Brew Ha Ha restaurant for an “Open Gaetz” event on June 1.

“My supporters are just as passionate as my opponents. They have the capability to be violent too. My efforts to ensure ALL participants remain nonviolent are undermined greatly by the Defendant’s actions. Only incarceration allows me to reinforce to my supporters and opponents alike that Free Speech is welcomed – but assault will not be tolerated.”