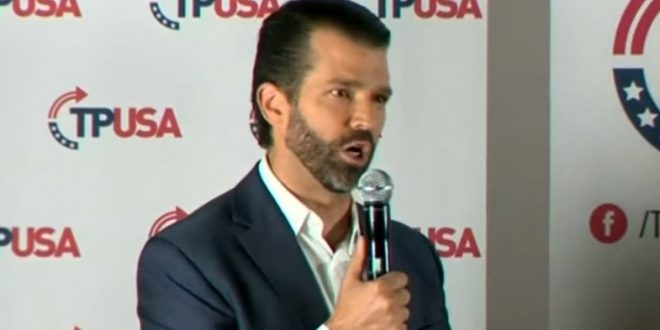 Donald Trump Jr ventured on to the University of California’s overwhelmingly liberal Los Angeles campus on Sunday, hoping to prove what he had just argued in his book – that a hate-filled American left was hell-bent on silencing him and anyone else who supported the Trump presidency.

But the appearance backfired when his own supporters, diehard Make America Great Again conservatives, raised their voices most loudly in protest and ended up drowning him out barely 20 minutes into an event scheduled to last two hours.

The audience was angry that Trump Jr and his girlfriend, Kimberly Guilfoyle, would not take questions. The loud shouts of “USA! USA!” that greeted Trump when he first appeared on the stage of a university lecture hall to promote his book quickly morphed into even louder, openly hostile chants of “Q and A! Q and A!”

Video from ABC 7 Eyewitness shows Trump Jr.’s girlfriend Kimberly Guilfoyle, who is also an adviser to President Trump, hitting back at other hecklers in the crowd for drowning out her partner. She said: “You’re not making your parents proud by being rude and disruptive and discourteous. We’re happy to answer a question. “Respect the people around you so they can hear. You don’t play by the same rules.”

After failing to convince angered attendees to settle down and listen, Trump Jr. and Guilfoyle decided to leave the book launch. A video shared on Twitter by a fan of Nick Fuentes, the alt-right commentator who attacks the campus conservative group Turning Point USA from the right, shows the couple being booed as they leave the building by a large group chanting “American First.” Fuentes later tweeted that the abrupt end to the event was a “HUGE victory” for the conservative protesters.

Junior getting protested for not being alt-right enough is not something I had on my dystopian hellscape bingo card. https://t.co/bbmipMhkb0

Turning Point USA announced that they cancelled the Q and A… Everyone booed. What are you afraid @charliekirk11 ?? pic.twitter.com/jW2Kfo9MTN

Audience: We want to ask questions
TPUSA: Have sex incel

This will end well. pic.twitter.com/DrXlVyjIsk