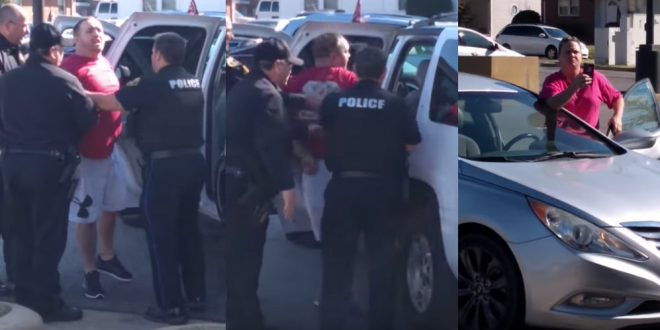 The “Baby Trump” balloon has been slashed — and as a result, deflated. The popular protest symbol against President Donald Trump was floating among the throngs of college football fans in Tuscaloosa, Alabama, on Saturday when it was attacked by a man, an organizer of the protest told CNN.

At about 2:30 p.m. ET, before the kickoff between Alabama and Louisiana State, an unknown man came up to the balloon and stabbed it, according to Nic Gulas, one of the people who organized the “Baby Trump” balloon appearance at the game. The balloon deflated after the gash, Gulas said.

“It was a random dude just ran up to the balloon, stuck a knife in it, and ran off. We had police close by because of another driver earlier, so they went over and arrested him and his getaway driver,” Gulas told CNN through Twitter.

The man who stabbed the balloon at Monnish Park was wearing an Alabama Crimson Tide t-shirt. He was screaming at the organizers of the Donald Trump protest as police led him, handcuffed, into the back of a squad car. He was booked into Tuscaloosa County Jail and charged with Criminal Mischief.

The ‘Baby Trump’ balloon was brought to Tuscaloosa Saturday to protest the presence of President Donald Trump at the game.

Donors raised the $4,000 needed to rent the balloon earlier this week. When asked for comment the organization that owns ‘Baby Trump’ said the deflation doesn’t make much of a difference to them, “We have 6 [Baby Trump balloons] and will persist to resist the Liar-in-Chief.”

Police identified the suspect as 32-year-old Hoyt Hutchinson of Tuscaloosa. They said officers arrested him after he sliced into the balloon and tried to flee. By the time the game ended, a GoFundMe page titled “Restitutions for Baby Trump Stabber” had been set up by a user named Hoyt Hutchinson. It featured a video of a man resembling Hutchinson’s mugshot yelling “Trump 2020!” as officers push him into an SUV.

A description on the page read: “Hoyt made sure our beloved president didn’t have to see this disrespectful balloon on the streets of Ttown today!!” The paged had raised more than $15,000 as of Sunday morning, far surpassing its goal of $6,000.

According to the Tuscaloosa News, Hutchinson posted a Facebook Live video the before game in which he said he wanted to take down the Baby Trump float. “I’m shaking, I’m so mad right now,” the man in the video said. “I’m fixing to pop this balloon, without a doubt. Stay tuned. This should be interesting.”

Jim Girvan, the organizer of a group that “adopts” out Baby Trump balloons for protests, said a man charged the balloon with a knife and cut an 8-foot-long (2.4-meter-long) gash in the back. Girvan said the man was arrested. https://t.co/71KcmKiYbi

Alabama Man Hoyt Hutchinson, 32, arrested for stabbing Baby Trump balloon before the LSU-Alabama game. “I’d do it again,” he said after getting out of jail https://t.co/xQfxeQ2D3I pic.twitter.com/HpYwgVCq8N

Hey, Hoyt Hutchinson – if you can’t afford to do the time & pay the fines, don’t do the crime.

Hoyt is socializing the costs of his felony criminal damage to property arrest, lawyer and trial via GoFundMe. #LSUvsBAMA pic.twitter.com/cvtlxcJ4Uj