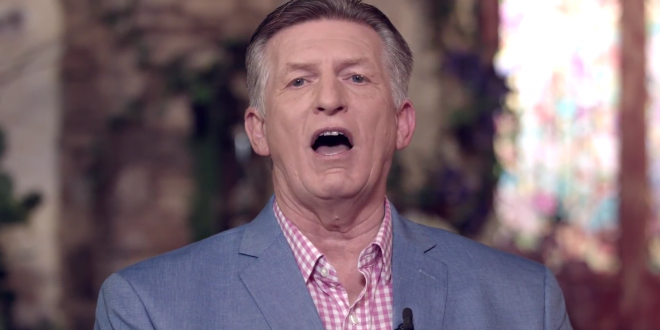 Christian TV Host: This Impeachment Is A “Jew Coup”

“That’s the way the Jews work, they are deceivers, they plot, they lie, they do whatever they have to do to accomplish their political agenda. This ‘impeach Trump’ effort is a Jew coup and the American people better wake up to it really fast because this thing is moving now toward a vote in the House and then a trial in the Senate. We could have a trial before Christmas.

“This is a coup led by Jews to overthrow the constitutionally elected president of the United States and it’s beyond removing Donald Trump, it’s removing you and me. That’s what’s at the heart of it. You have been taken over by a Jewish cabal.

“The church of Jesus Chris, you’re next. Get it through your head! They’re coming for you. There will be a purge. That’s the next thing that happens when Jews take over a country, they kill millions of Christians.” – Pastor Rick Wiles.

As noted at the link, Rick Wiles’ TruNews Network is regularly granted press credentials by the White House.

Previous Pentagon Says Case Of War Criminal SEAL Is Closed
Next Rudy Giuliani: “I Am A High-Functioning Human Being”