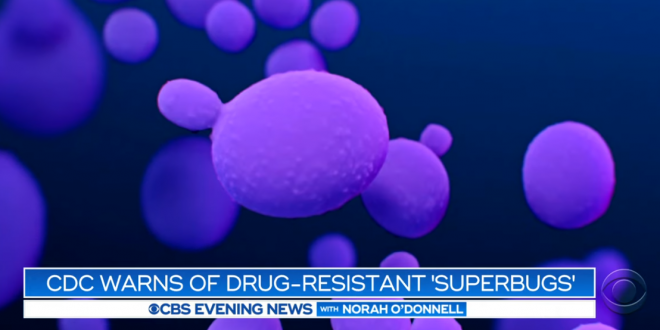 Drug-resistant “superbugs” infect 2.8 million people and cause more than 35,000 deaths each year, underscoring the enormous public health threat of germs in what one official describes as a “post-antibiotic era,” according to a new Centers for Disease Control and Prevention report.

The report, which analyzes electronic health records and other data, shows an infection every 11 seconds and a death every 15 minutes on average from bugs that resist treatment from antibiotics. The CDC said there are nearly twice as many deaths from antibiotic-resistant infections compared to the agency’s 2013 report, which likely underestimated the numbers.

In a letter accompanying the report, CDC Director Robert Redfield urged the public to “stop referring to a coming post-antibiotic era – it’s already here,” with drug-resistant bugs in every U.S. state and around the globe.

The report was formulated by looking at bacteria and fungi, finding 21 different infections and categorizing them as “urgent threats,” “serious threats,” “concerning threats,” and “watch list.” However, it does not include parasites or viruses like influenza or HIV.

The results of the 2019 report are also higher than in the previous AR threat report published in 2013. It was found at the time that around 2 million people suffered from drug-resistant infections, with nearly 23,000 dying from said infections.

“Germs continue to spread and develop new types of resistance, and progress may be undermined by some community-associated infections that are on the rise,” the report says.