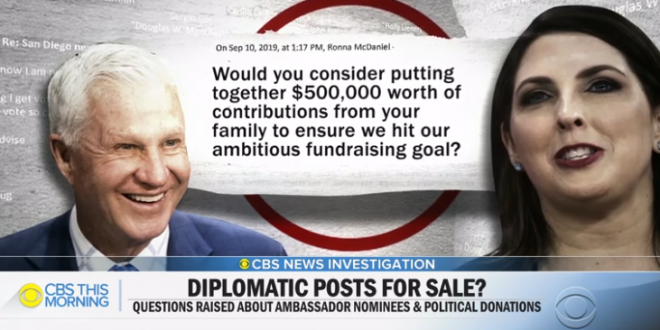 A CBS News investigation has uncovered a possible pay-for-play scheme involving the Republican National Committee and President Donald Trump’s nominee for ambassador to the Bahamas. Emails obtained by CBS News show the nominee, San Diego billionaire Doug Manchester, was asked by the RNC to donate half a million dollars as his confirmation in the Senate hung in the balance, chief investigative correspondent Jim Axelrod reports.

Manchester’s big mistake was copying staffers of two senators who controlled his nomination, Kentucky’s Rand Paul and Idaho’s Jim Risch, alerting them to his willingness to donate more after confirmation. “I can only tell you that if I received an email like that, there would have been a five-bell alarm that went off,” Sen. Bob Corker said. And that’s exactly what happened. Risch alerted the White House, which then asked Manchester to withdraw.

Hit the link and watch the video.

RELATED: As longtime JMG readers will recall, Manchester was a major financial backer of California’s Prop 8, prompting a massive and successful boycott of his hotels by conventions and trade groups.

.@GOPChairwoman Ronna McDaniel personally hit up Doug Manchester while he was still under consideration for the role of Ambassador to the Bahamas in hearings by the Senate for a $500,000 donation. She is corrupt and should resign. https://t.co/OnsmD5jk0m