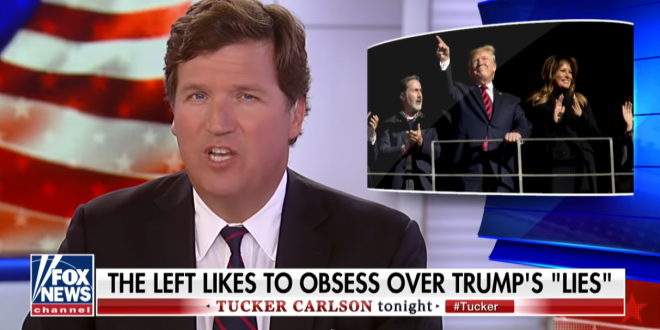 Carlson: Let’s Just Agree That Trump Is A Racist Liar

“The crowd at the inauguration was not the largest ever measured on the national mall. It wasn’t. Why did the president claim otherwise? Because that’s who he is. Donald Trump is a salesman: A talker, a boaster, a compulsive self-promoter. At times, he’s a full blown BS artist.

“Is lying really the reason the left despises Donald Trump? Or could the real problem be, as is so often the case, the exact opposite of what they claim it is? Think back over the last four years. When have the CNN anchors been the angriest?

“Was it when Trump told some whopper, or exaggerated his own accomplishments? Nope. They’re used to that kind of lying. Everyone who spends time around politicians is. What infuriates official Washington is not when Trump lies, but when he tells the truth.

“Truth is the real threat to their power. Trump didn’t claim that everyone coming over southern border is a criminal. But some are. That’s true. And because it is true, you are absolutely, under no circumstances allowed to say it.

“Let’s just agree that Trump is a racist liar and move on. By the way, did you know he’s up to almost 14,000 lies by now? My gosh, what a bad person he is. Unlike us.” – Tucker Carlson, admitting that Trump lies compulsively and that his cultists simply don’t care.