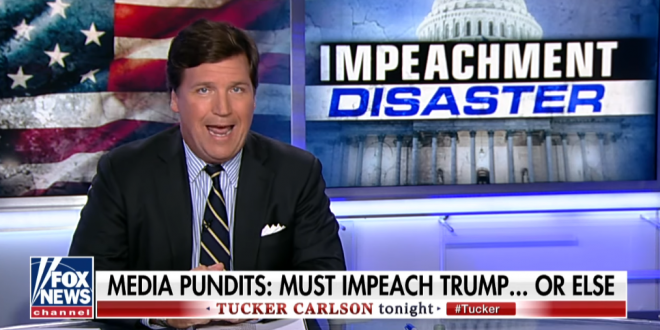 Fox News host Tucker Carlson on Monday night repeatedly conveyed that he is rooting for Russia against Ukraine and that he does not care that people are dying in the conflict. “Now, I know Hunter Biden, I actually like Hunter Biden, but that’s totally corrupt and you know it. Why is it worse to ask about it than it is to do it?” Carlson said, referring to Trump and Hunter Biden respectively.

“Because people are dying on the front lines,” said former adviser to the Clintons, Richard Goldstein. “You think it’s a joke.” Carlson continued: “Why do I care? Why do I care what’s going on in the conflict between Ukraine and Russia? And I’m serious.” Goldstein said he would tell Carlson why, but the Fox News host reiterated his stance. “And I’m serious. Like, why do I care? And why shouldn’t I root for Russia? Which I am,” Carlson said.

It’s comments like this from @TuckerCarlson that make me wonder who my friends are and who my enemies are – it makes me wonder whether the world has gone insane.

I know who I support; Ukraine is an imperfect ally but Russia is a perfect enemy. https://t.co/oY2sRSEKw3

Fox News and Tucker Carlson rip the tattered American mask off: Carlson is rooting for Russia to invade Europe.

Russia invaded Ukraine, stole Crimea, and continues to murder Ukrainians in Putin’s war on its soil

At the very end of his show, obviously aware his declaration that he’s rooting for Russia against Ukraine had become a thing, Tucker Carlson claims that he was “joking” when he said it and that he was merely mocking “obsession” with Russia. pic.twitter.com/MxFLMRiApa

So Tucker Carlson said point-blank that he supports Russia in its war with Ukraine: “Why shouldn’t I root for Russia?”

This is the anti-democratic, morally degraded reality we are up against, smugly delivered to millions of Fox viewers.

The endorsement of Russia’s aggression against Ukraine delivered tonight by @TuckerCarlson is a pretty specialized form of Trump admiration. It’s not characteristic of very many of those who cast that misguided vote in 2016.

Tucker Carlson is siding with Russia over Ukraine. Just wanted people to know that. He admitted it on his show. Make Putin Great Again for Western Civilization and God’s Divine Plan and the Free Market Something Something.