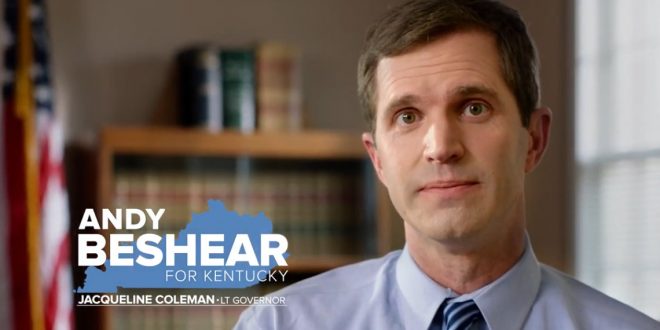 As the polls closed Tuesday, Republican Gov. Matt Bevin repeated his prediction of a big victory over Democratic Attorney General Andy Beshear in their heated race for Kentucky governor. “We’re cleaning things up and I think you’re going to see that evidenced by the fact that people are turning out and they want better government, they want cleaner government, less corrupt government, and we’ll find out today what happens,” said Bevin, who would become the first Republican to win re-election in the Commonwealth.

Democrat @AndyBeshearKY has shocked the nation and defeated incumbent Matt Bevin to become the 63rd Governor of the Commonwealth. pic.twitter.com/NPXuolnkP4

Trump campaigned for Matt Bevin in Kentucky last night and said to the crowd, “You gotta vote because if you lose, it sends a really bad message. It just sends a bad and they’re going to build it up … You can’t let that happen to me.”

After a hard-fought race marked by angry rhetoric about teachers and the intervention of national politics, Kentucky voters finally got the chance to make their decision at the ballot box. https://t.co/lL20kbxx5O