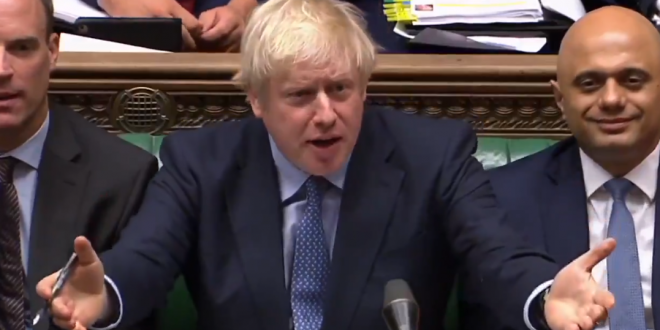 British Prime Minister Boris Johnson’s election campaign launch was marred by the resignation of one of his ministers, a gaffe about the victims of a deadly tower blaze and a doctored video of an opponent released by his party. Just an hour after meeting Queen Elizabeth to formally begin the election campaign, Johnson’s minister for Wales, Alun Cairns, resigned after being accused of lying about his knowledge about an aide who allegedly sabotaged a rape trial.

“Let’s get Brexit done,” Johnson, 55, said outside his Downing Street official residence, adding that Labour Party leader Jeremy Corbyn would bring yet more turmoil with fresh referendums on EU membership and Scottish independence. Johnson said Corbyn hated wealth and was thus like Soviet leader Josef Stalin – who sent millions to their deaths in labor camps. Corbyn said such remarks were “nonsense” that the super-rich came up with to avoid paying more tax.

The wheels have already fallen off the Conservative campaign:

❌Minister forced to resign over role in a rape case scandal.

In a doctored video, tweeted on the Tories’ official twitter account, the party inserted several seconds of Sir Keir’s face in silence after a question during a TV news interview. This is the level of the Conservative parties desperation https://t.co/VyPsV5HcvR

So this happened. The Conservative Party took an interview from @GMB this morning. They edited it to add on the last shot in which Keir Starmer looks stumped. But that didn’t happen. In the original Keir Starmer immediately answered @piersmorgan ‘s question. https://t.co/G8tU2SUpbq

Boris Johnson compared Jeremy Corbyn to Stalin over his “hatred” of wealth creators.

Boris Johnson comparing Corbyn to a murderous dictator is nothing new. He has previously compared the EU to Hitler, Gordon Brown to Gadaffi, Ed Miliband to Stalin, London AM Caroline Pidgeon to the Taliban and university admission officers to Pol Pot. https://t.co/LNiYQJ2vd1

Previous Pence’s Office Is Steering US Foreign Aid To Christian Groups, Those Who Object Are Being “Penced” (Fired)
Next Impeachment Support Dips Slightly In New Poll