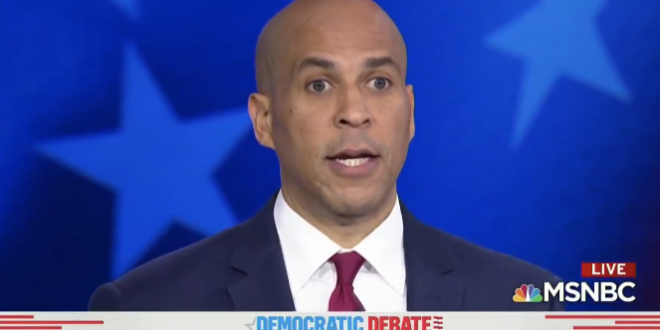 Booker Blasts Biden On Legal Weed: Were You High?

It was a debate moment to remember for Cory Booker. Not so much for Joe Biden. With barely 15 minutes left in the two-plus hour Democratic presidential debate, the New Jersey senator brought the house down by saying he was incredulous the former vice president opposed legalizing marijuana.

“I thought you might have been high when you said it,” Booker said to Biden. Booker has introduced legislation to remove the federal ban on cannabis, leaving it to the states to decide whether to allow the drug for medicinal or recreational use.

Biden has called for decriminalizing cannabis, but he still wants federal restrictions on its use even as he, like Booker, would expunge previous convictions for using marijuana.

Cory Booker to Joe Biden: “This week I hear him literally say that I don’t think we should legalize marijuana. I thought you might have been high when you said it.” #demdebate https://t.co/u9aiISXBvU pic.twitter.com/RUZ26t50WD

When Biden said he opposed marijuana legalization,
“I thought you mighta been high when you said it… because marijuana in our country is already legal for privileged people, and it’s why the war on drugs has been a war on black and brown people.”#DemDebate

“I thought you might have been high when you said it,” Cory Booker remarked to Joe Biden, who recently said he doesn’t support legalizing marijuana at the federal level, during the #DemDebate. https://t.co/fIVPtFyWFZ pic.twitter.com/PbCy0wVFAk