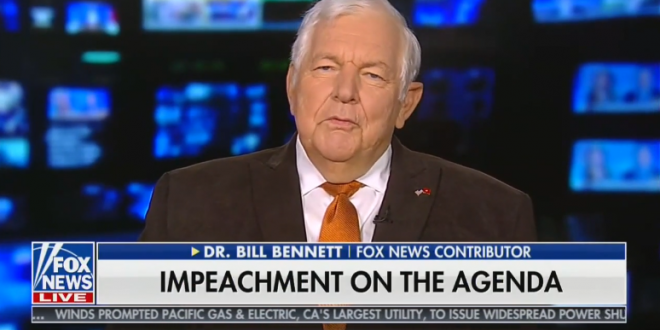 “This quid pro quo, if it actually was completed — which it wasn’t — was a good thing. We were trying to help Ukraine with arms and other things, unlike the Russians who were obviously invading the country, and unlike Obama who was sending them socks.

“But I think at the end of the day, people are going to realize there was no investigation of Biden in Ukraine and the money was delivered. There is no there there for that quid.” – Bill Bennett, speaking on Fox News.

Bennett was Reagan’s Secretary of Education and drug czar for Bush I. He earned scathing headlines in 2003 when it was revealed that he’d lost millions in Las Vegas due to his gambling addiction while his Empower America group publicly lobbied against casinos in other states. Empower America is now known as FreedomWorks.