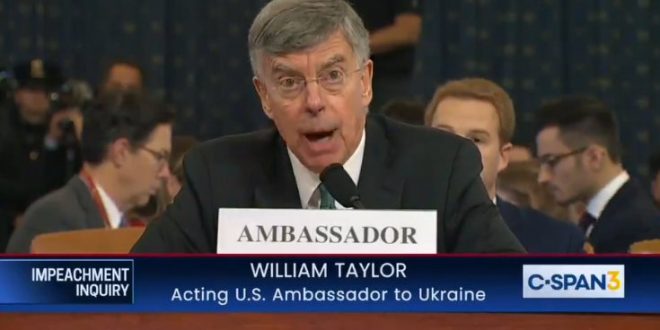 A grand total of 13,098,000 Americans tuning in to watch the televised opening of the House Select Committee on Intelligence questioning on Wednesday, Ambassador William Taylor and Deputy Secretary of State George Kent topped the 12.9 million who saw the former FBI Director’s circumspect stint in the hot seat on July 25.

Fox News won the viewership wars for yesterday’s very partisan hearing with 2.9 million viewers. The outlet was number two in the key news demo of adults 25-54 with an average of 442,000 to ABC’s 496,000 – though it should be noted that the Disney-owned network started things a little earlier at 9:50 AM.

In total audience, MSNBC had 2.7 million viewers, ABC had 2 million and CBS was close behind with 1.9 million. CNN was in fourth place with 1.85 million and NBC was last among the major news players with 1.7 million – though it should be noted the Comcast-owned network was in the unique position of having its sister cable newser as a direct rival for the same feed.

Previous Women For Trump Co-Chair: Thanks To The President, Women Are Truly Equal For The First Time Ever [VIDEO]
Next Ohio GOP Passes New Law: Students Get Credit For Wrong Answers If Their Reasoning Is Based On Jesus