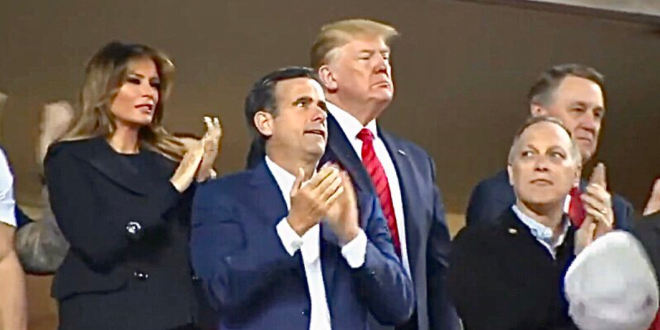 World Series Fans Chant “LOCK HIM UP” At Trump

In his first appearance at a Major League Baseball game since taking office, Mr. Trump was not invited to throw the first pitch when he showed up Sunday night at Game 5 between the Washington Nationals and the Houston Astros. Instead, when he was shown on the stadium’s large screen, the crowd booed robustly and began chanting, “Lock him up!” In the upper decks, fans held up a giant “Impeach Trump!” banner.

The unfriendly reaction may explain his reluctance to take himself out to the ballpark until now. Although he has boasted of his time as team captain for the baseball squad at the New York Military Academy and in the past happily offered regular commentary on the game, before Sunday Mr. Trump had never attended a professional baseball contest while living in the White House, an unusually prominent break from the national pastime for a sitting president.

when you’re reminded that everyone hates you pic.twitter.com/mo6MsBl7LN

“Lock him up!” chants break out at Nationals Park, as President Trump attends the World Series on Sunday night – @albamonica pic.twitter.com/ymhzRSzhey

Loud boos for President Trump when he was shown on big screen at Nationals Park during Game 5 of the World Series. Some fans in crowd chanted “lock him up” afterward. pic.twitter.com/5cYqQT4Itf

President Trump was booed loudly by the fans at Nats Park when he was shown on the big screen.
Then came a loud chant: “Lock him up.” @wusa9 pic.twitter.com/LBbgSAHd6k

“Why we should bomb all MLB stadiums after they allowed our Leader to be embarrassed in front of the world. That’s our first topic tonight on Lou Dobbs.” pic.twitter.com/1ttMi5Gx65

“For the next hour we’ll be talking about just how Antifa infiltrated the World Series and piped in all those really fake sounding boos against dear leader.”

I guarantee you, when Trump committed to attending tonight’s World Series game:

1) He knew the Al Baghdadi raid was happening; and

2) He thought he’d be greeted as a hero

He showed up for what he thought would be worshipful applause.

There is a new banner at Nationals Park now. pic.twitter.com/f0Dha1TVFF

The look on Trump’s face when he realizes the entire stadium was booing him… dude actually looks like he’s gonna cry. The Truth Hurts! pic.twitter.com/BVirK2nKXx

Normally I’d offer slight praise for someone who walks into a hostile environment, knowing they’re gonna be poorly received.

But @realDonaldTrump has no self awareness and this photo shows that he did not expect the reception we all knew was coming.#LockHimUp #BooTrump pic.twitter.com/V0BareRApI

Previous CHATTER AWAY: Overnight Open Thread
Next Dem Rep To Resign Amid Allegations Of Affairs [VIDEO]