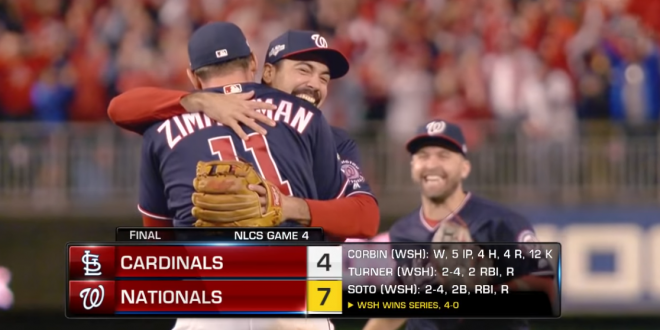 Washington DC Gets Its First World Series In 86 Years

Since Oct. 7, 1933, there have been 14 American presidents, 12 men on the moon, hundreds of Academy Award-winning performances in movies, and countless insults hurled during election debates but not a single World Series game played in Washington, D.C. That is about to change.

Doing their best to defy the famous 1904 Charles Dryden quip about D.C. baseball — “first in war, first in peace, and last in the American League” — the Washington Nationals defeated the St. Louis Cardinals in four straight games to reach the 2019 World Series.

The Nationals, who have won 16 of their last 18 games, finished off the Cardinals by a score of 7-4 on Tuesday night at Nationals Park. Their most-recent antecedent in D.C. baseball history is a 1933 Senators team that featured four future Hall-of-Famers.

The Atlantic has had 994 named storms, 525 #hurricanes and 209 major (Category 3+) hurricanes since a Washington DC MLB franchise (e.g., Senators/#Nationals) has played in a #WorldSeries game. Congrats Nationals! pic.twitter.com/3XMEHEsFyF

Congrats to the Washington Nationals, heading to the World Series.

Now that DC finally gets a World Series, can we get it a President?

The Nationals clinching a World Series birth is even better with titanic music 😭 pic.twitter.com/pY7BANkVKM

To be clear, the @Nationals are bringing the #WorldSeries back to DC for the 1st time since 1933, but also since 1948. The Homestead Grays-playing most home games in DC-won the Negro League World Series in 1943, 1944, & 1948. Key to many Grays victories-Hall of Famer Josh Gibson! pic.twitter.com/BH1IAvt5R5

YOUR WASHINGTON NATIONALS HAVE WON THE PENNANT! THE #WorldSeries IS COMING TO WASHINGTON, DC! pic.twitter.com/Ql82G3bwGi

NATS HISTORIC WIN! Washington is heading to the World Series for the first time in 86 years after the wild-card Nationals swept the St. Louis Cardinals to take the NL Championship Series! #WinTheFight #STAYINTHEFIGHT @Nationals https://t.co/YOxodeq8oL pic.twitter.com/RvJurn4INP