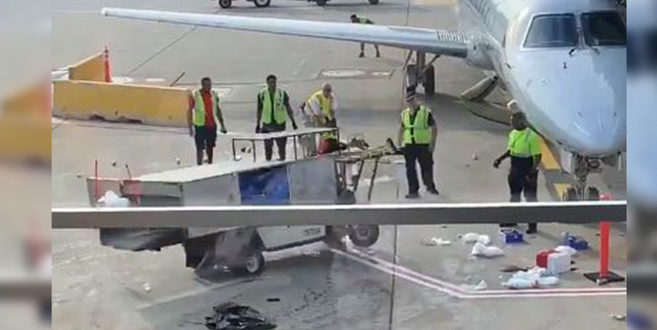 An out of control, apparently furious, and driverless catering cart that was spinning in wild circles on the tarmac of Chicago O’Hare International Airport (ORD) on Monday was laid to its final rest by a quick-witted worker who prevented it from hitting a plane by slamming into it with another vehicle.

American Osteopathic Association chief executive Kevin Klauer uploaded video of the incident to Twitter (where it has racked up over three million views and counting). Nearby groundcrew can be seen rushing to the spinning catering cart as it spewed loose pallets of beverages and only barely avoided running over a nearby worker.

American Airlines says it is investigating after a catering truck lost control on the tarmac at O’Hare Airport.

“We appreciate the quick action of our team member who stopped the vehicle,” the airline said in a statement. No serious injuries reported. https://t.co/wyjMR4T4lc pic.twitter.com/KGo2rov52H

Previous CHATTER AWAY: Overnight Open Thread
Next Colbert Audience Chants “Lock Him Up” At Hillary