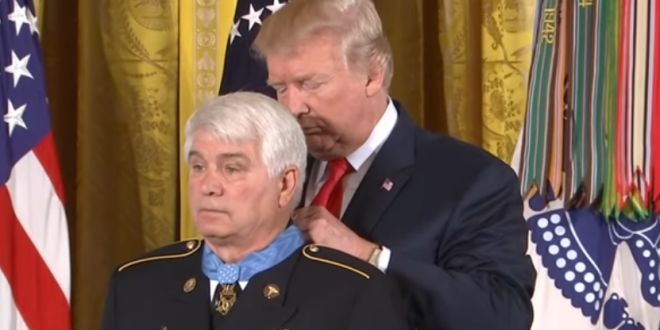 In a somber White House ceremony in July 2017, President Trump draped the Medal of Honor around the neck of James McCloughan. He was credited with saving the lives of 10 men in a brutal, days-long battle in Vietnam, and Trump told the former Army medic that “we are in awe of your actions and your bravery.” On Wednesday, Trump posted a photo of that moment with McCloughan’s image replaced by that of a dog.

The conservative site Daily Wire tweeted the image Tuesday with McCloughan removed. A watermark for the site appears in Trump’s tweet, but it is a cropped version that removes the attribution of the source photo, which is the Associated Press. That would have indicated that it began as a legitimate news photo, raising the question of whether Trump or a staffer knew McCloughan had been edited out.

To recap, Ben Shapiro’s Daily Wire stole the source photo from the AP and Trump lifted the Daily Wire remix.

President Trump on Wednesday shared a photograph from 2017 altered to show him placing a medal around the neck of the dog injured in the raid that led to the death of Abu Bakr al-Baghdadi, the Islamic State’s leader.https://t.co/XUWwq0b9Ie

Previous Junior Boasts: Daddy Will Be Reelected In A Landslide
Next Top Russia Official To Quit National Security Council