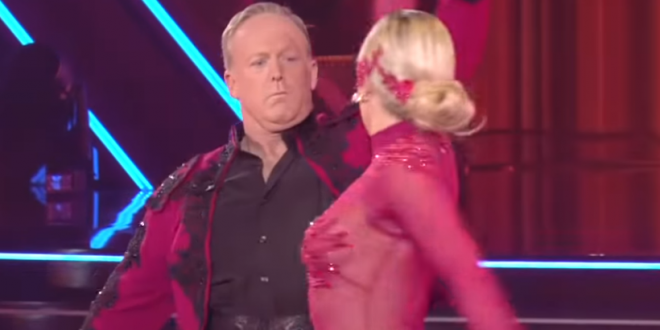 Trump To His Cultists: Vote For Sean Spicer On DWTS

ABC’s “Dancing With the Stars” tangoed into uncharted drama this season, announcing former White House spokesman Sean Spicer as a celebrity contestant.  The controversial pick brought the kind of response you’d expect in the 2019 political climate – cheers from President Donald Trump supporters for the notoriously combative mouthpiece, along with jeers (and even talk of boycotts) among Trump critics.

The season’s surprise has been seeing Spicer’s perpetual smile while he embraces the world of spray tans and flamboyant outfits. Despite low judges’ scores for his plodding dance moves with pro partner Lindsay Arnold, he remains a contender for the mirrorball trophy. Strong fan support has carried him through three eliminations, though he’ll be tested again Monday (8 EDT/PDT).

Former Trump White House Press Secretary Sean Spicer continues his run on ABC’s Dancing with the Stars — despite consistently low scores — after he and former Arkansas Governor Mike Huckabee asked followers to help Jesus own the libs by voting for Spicer en masse.

Spicer quickly recognized the dance competition as the struggle between Satan and the heavens that it clearly is, and retweeted Huckabee with the message “Clearly the judges aren’t going to be with me,” and added “Let’s send a message to #Hollywood that those of us who stand for #Christ won’t be discounted.”

Since then, Spicer has consistently been in the bottom two of the competition’s judges’ scores — despite his continued streak of not defending Hitler — which could have put him in jeopardy of elimination by the judges.

Vote for good guy @seanspicer tonight on Dancing With The Stars. He has always been there for us!

Our Kurdish allies are being slaughtered, ISIS sympathizers are escaping, and northern Syria is up in flames, but Donald Trump wants you know it’s important that his ex-press secretary Sean Spicer (a liar, with no rhythm) win Dancing With the Stars.

Abandon the Kurds to hell, stick by Sean Spicer on a reality show. Trump loyalty. https://t.co/a6tvNvzCD6