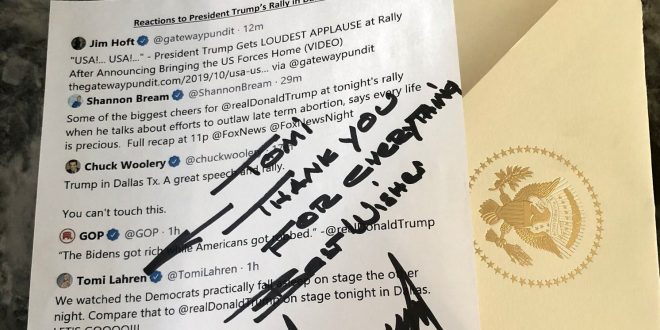 Earlier this week, another sign of Trump’s retreat into a solidly right-wing and MAGA media ecosystem materialized, this one posted to Twitter by Tomi Lahren, a Fox Nation host and Trump superfan. On Wednesday, Lahren tweeted a photo of a sheet of paper the president had signed, thanking her “for everything.”

The page, labeled “Reactions to President Trump’s Rally in Dallas, Texas,” was a compilation of tweets, including one of hers, featuring praise or positive news for Trump’s recent event. The print-out also had Twitter posts written by far-right blogger Jim Hoft, Fox News anchor Shannon Bream, the RNC, and former Wheel of Fortune host Chuck Woolery.

The autographed piece of paper the Fox Nation host received is actually the result of a long-standing demand that Trump has made of his aides, one that started during the 2016 campaign and continued into his presidency.

According to the above-linked report, Trump sometimes demands such printouts within minutes of concluding his rallies.