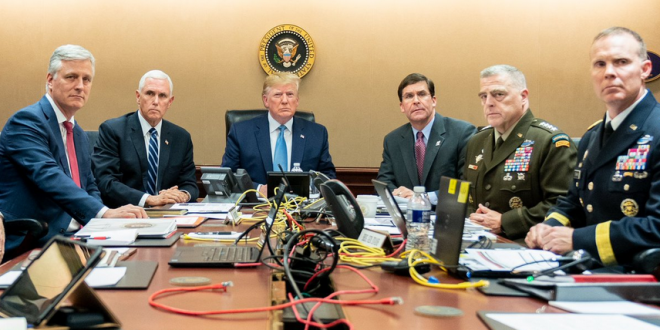 The chief official White House photographer for former Presidents Ronald Reagan and Barack Obama suggested the Trump administration staged Saturday’s stern-faced Situation Room picture in the wake of a U.S. military raid that resulted in the death of a major ISIS figurehead.

Pete Souza, the former director of the White House Photography Office, called the timestamp of the Situation Room picture into question Sunday morning.

So Donald Trump was playing golf at the time the raid occurred…and the photo they released was staged several hours afterward?

Sounds about right for this White House.

Everything you need to know about Trump is in these two pics:

The “Baghdadi raid” pics was staged, hours later. Trump was playing golf when it happened. pic.twitter.com/IpSuLnAi6M

Here you go. According to the public schedule, they left the golf club at 3:33pm. They reported the raid took place at 3:30pm. An hour and a half later they staged the photo. https://t.co/QUkEvTZ3tO

Former Chief Official White House Photographer is suggesting that the White House may have staged this photo in the Situation Room. pic.twitter.com/9XXmVsG3m6

It’s apparently hard to agree on which direction to look in a #staged war room photo (because the president was golfing when the actual Baghdadi raid happened). pic.twitter.com/ufJjVQHh2Z

Previous Company Tied To Trump’s Brother Gets $33M Contract
Next Graham: Trump’s Critics Should Be Hailing Him Today