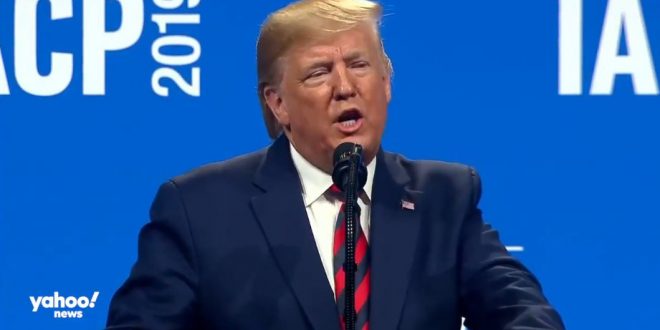 President Donald Trump made his way to Chicago today to speak at a police conference where he bashed the city’s head of police and attacked the city as a worse place to live than Afghanistan.

Chicago Police Superintendent Eddie Johnson had opted out of attending Trump’s speech at the International Association of Chiefs of Police conference, saying it “doesn’t line up with our city’s core values, along with my personal values.”

Trump went on to claim Chicago “is embarrassing to us as a nation. All over the world they’re talking about Chicago. Afghanistan is a safe place by comparison. It’s true. Police officers of Chicago are entitled to a police superintendent who has their backs and knows what he is doing.”

“Boom, boom, boom.” This is the hand gesture Trump made to mime how Dayton police took down the mass shooter there. pic.twitter.com/KRA095HXQF

Trump: “I want to thank you, President Obama, for giving me 142 open judges. How you allowed that to happen is beyond me. It’s beyond me. Thank you President Obama very much. Everybody in this room thanks you.” It was 104 vacancies; McConnell was the primary reason.

Trump boasts that the Republicans gained two Senate seats in the midterms. “Nobody knows that,” he says.

Trump has reprised his Sir story about the NYPD cop who told him about how his 401(k) has skyrocketed and his wife now admires him as an investor. He explains that he likes shaking police officers’ hands, then says he does it not because he likes it but because he respects them.

Trump is now telling a many-Sir story about an unnamed man who told him “it’s sad, sir, it’s very, very sad” what’s going on in Chicago, that it’s the mayor and police leaders’ fault, and that the cops could solve the local “killing problem” in 1 day if they were left alone.

Trump going to Chicago to shit all over the city (saying it makes Afghanistan look safe by comparison) is a reminder of the asymmetry in our politics. A Dem president would get absolutely killed if he, say, went to Topeka and mocked education levels in the heartland.

Trump: ‘Afghanistan is a safe place by comparison’ to Chicagohttps://t.co/zf0RhI1Upg by @stableford pic.twitter.com/Tsda0Yj6Vl