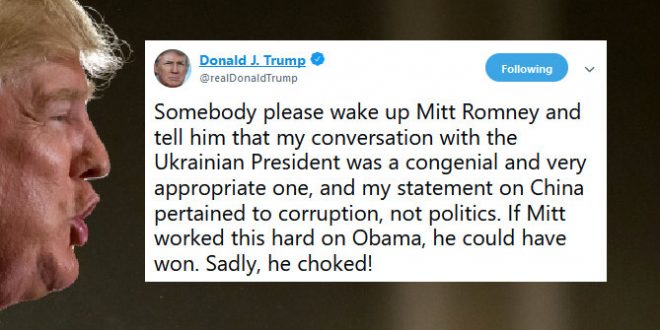 President Trump lashed out at Sen. Mitt Romney (Utah) on Saturday after the Republican senator criticized Trump over his dealings with Ukraine. Trump maintained that his public call this week for China to also investigate former Vice President Joe Biden “pertained to corruption, not politics.”

Romney, who has at times been a vocal critic of Trump’s policies and actions in office, broke sharply this week with Trump’s call for China and Ukraine to investigate Biden, a leading Democratic presidential contender. Romney called the effort “wrong and appalling.”

Somebody please wake up Mitt Romney and tell him that my conversation with the Ukrainian President was a congenial and very appropriate one, and my statement on China pertained to corruption, not politics. If Mitt worked this hard on Obama, he could have won. Sadly, he choked!

Previous Report: Second Whistleblower May File Own Complaint
Next SCOTLAND: Trump’s Golf Resort Is Deeply In The Red