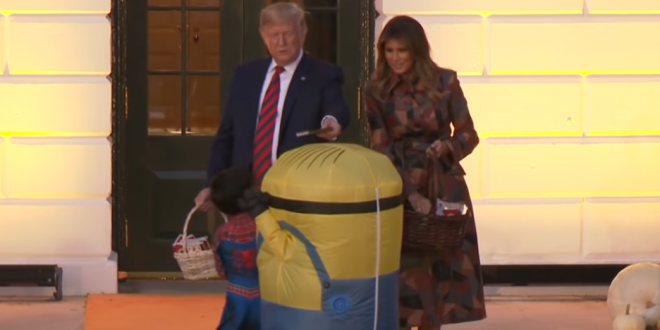 While handing out Halloween candy to trick-or-treaters at the White House on Monday, President Donald Trump and First Lady Melania Trump were approached by a child wearing a minion costume from the Despicable Me movies.

But instead of placing a treat in the minion’s trick-or-treat bag, a video recorded by Sky News shows Trump patting the kid on the head with a Hershey’s chocolate bar before leaving it on top of the costume. Melania follows suit with her offering and both candy bars proceed to fall off in a matter of seconds, to Trump’s apparent delight.

Minion : I’ve a bag
Trump: No, Imma put the chocolate on your head
Minion:….. but ….. but…
Trump: tappy tappy tappy! pic.twitter.com/vNrPuGerpu

Here’s Barack Obama clowning around with a toddler dressed as Superman at the White House during Halloween 2016.

Donald Trump put candy on a Minion’s head and ignored the little Spider-Man in front of him. pic.twitter.com/iRvoS1bxr8