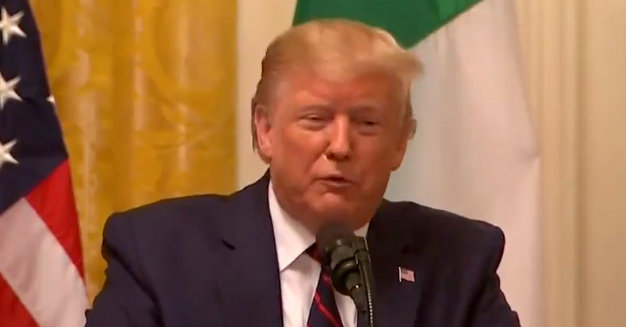 President Donald Trump says members of the Islamic State group who were being held in prisons by Kurdish fighters in Syria have been deliberately released in an effort to make him look bad. But senior U.S. officials are casting doubt on those claims.

Those officials say some Syrian Kurdish forces have moved north to fight Turkish troops who launched an attack across the border against the Kurds. The U.S. officials say other Kurds have stayed to guard the detention centers that hold thousands of IS militants.

The officials say the U.S. doesn’t have good on-the-ground information about what’s going on in some of the detention centers as American forces pull back from the border region. The officials say they believe only a small number of detainees have escaped.

President Trump: “PKK (Kurds) are a greater threat than ISIS.” Not a single National Security adviser to the president would agree with that statement. Turkish talking point.

Trump explains his Turkey policy: “The PKK, which is a part of the Kurds as you know, is probably worse at terror and more of a terrorist threat in many ways than ISIS… So it’s a very semi-complicated, not too complicated if you’re smart, but a semi-complicated problem.”

Erdoğan asked Trump whether he would negotiate with ISIS. “Trump told me he would, if it is necessary”

So Trump basically told Erdogan that he would negotiate with terrorists.

Trump touts turning the US military into something equivalent to a mercenary force for Saudi Arabia pic.twitter.com/HCTQwcMXaC

The events of this past week in Syria have made clear just how dangerous Donald Trump is to our national security, to our leadership around the world, and to the lives of our brave men and women serving in uniform. pic.twitter.com/jnV8LxZ5vT