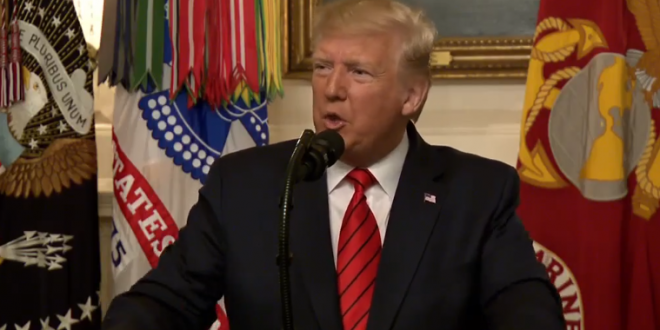 President Donald Trump says the U.S. military raid that took out Islamic State leader Abu Bakr al-Baghdadi is a bigger deal than the 2011 killing of Osama bin Laden during the Obama administration.

Trump is detailing the operation during an announcement at the White House. The president acknowledges that the death of bin Laden was significant, but he believes the news about al-Baghdadi is even bigger news.

Trump says that bin Laden didn’t become a global name in terrorism until the attacks of Sept. 11, 2001. The president says that’s in contrast to al-Baghdadi, who Trump says is responsible for building a caliphate.

Trump again suggests this is bigger than bin Laden:

Trump claiming killing Baghdadi was “bigger” than killing Bin Laden shows how petty and vile Trump is. He will use any moment he can to tell his base that he’s better than the dreaded black President they all hated.

It took @realDonaldTrump 33 minutes to finally whip out his micropenis and stroke himself that #Baghdadi‘s killing was even bigger and more significant than #binLaden‘s. Pathetic… #Trump

Trump trying to make this seem bigger than the death of Osama. Trying to have his “Osama moment.” It’s not working. (Especially since Trump has done more for the future of ISIS this month than Baghdadi has done in a long time.)