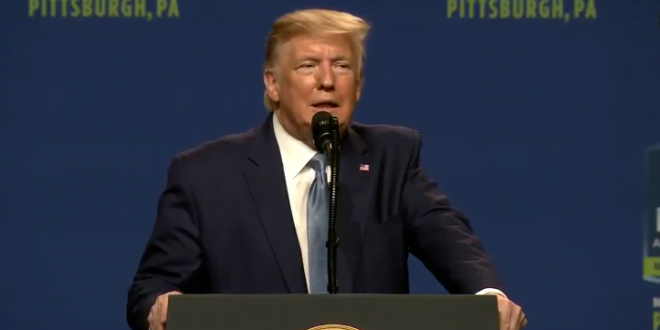 Trump: I Was Kidding About Colorado Border Wall

President Trump early Thursday morning sought to clarify remarks he made regarding his long-promised wall along the southern border, saying he was only kidding when he mentioned that a barrier was being constructed along the non-border state of Colorado.

Trump sparked mockery from several Democratic lawmakers Wednesday night after telling a crowd at the Shale Insight conference in Pittsburgh that the U.S. was in the process of building a wall along the southern border of Colorado, a state that sits directly north New Mexico.

Hey @TeamHeinrich & @tomudall
do one of you want to break it to @realDonaldTrump that Colorado’s border is with New Mexico, not Mexico…or should I? https://t.co/8Qqe59Oep4

#ColoradoBorderWall
Out of the news cycle for 24 hours, and wake up to discover Trump is building a border wall with Colorado, and his audience applauded. Grandpa would have his keys taken away; he needs nuclear codes taken away. pic.twitter.com/Woje4DSKHE

Trump to release this new map to prove we need a wall in Colorado. #SharpieGate #maddow #lastword pic.twitter.com/gwmtQxQZ7h