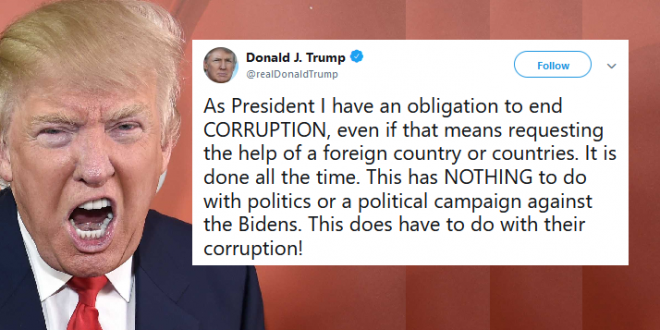 Trump: I Have An Obligation To Seek Foreign Meddling

President Trump is going all in. He declared he has the “absolute right” to call for foreign nations to investigate political rivals — publicly calling on China to investigate the Bidens — and he plans to ask Democrats to vote on starting impeachment or get stonewalled.

Why it matters: It now seems increasingly inevitable the House will impeach Trump. Think about it this way: Imagine a Democrat who called for impeachment before the China comment voting against impeachment after it.

Trump said on the South Lawn yesterday: “China should start an investigation into the Bidens, because what happened in China is just about as bad as what happened with Ukraine.”

As President I have an obligation to end CORRUPTION, even if that means requesting the help of a foreign country or countries. It is done all the time. This has NOTHING to do with politics or a political campaign against the Bidens. This does have to do with their corruption!

As the President of the United States, I have an absolute right, perhaps even a duty, to investigate, or have investigated, CORRUPTION, and that would include asking, or suggesting, other Countries to help us out!