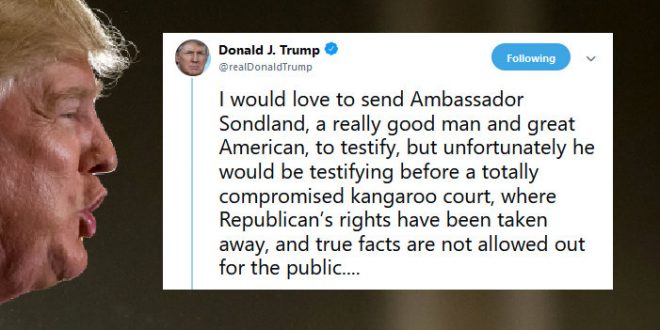 Trump: I Blocked Sondland From A “Kangaroo Court”

U.S. Ambassador to the European Union Gordon Sondland will be skipping his appearance on Captiol Hill after being deposed for a closed-door meeting as part of the ongoing impeachment inquiry, according to Congressional sources.

Sondland was mentioned in the original whistleblower complaint and a key witness to the Trump-Ukraine dealings.

House Intelligence Committee Chairman Adam Schiff told reporters on Tuesday that Sondland was in possession of documents on his “personal device” related to Ukraine which the State Department is withholding from the committee.

I would love to send Ambassador Sondland, a really good man and great American, to testify, but unfortunately he would be testifying before a totally compromised kangaroo court, where Republican’s rights have been taken away, and true facts are not allowed out for the public….

….to see. Importantly, Ambassador Sondland’s tweet, which few report, stated, “I believe you are incorrect about President Trump’s intentions. The President has been crystal clear: no quid pro quo’s of any kind.” That says it ALL!