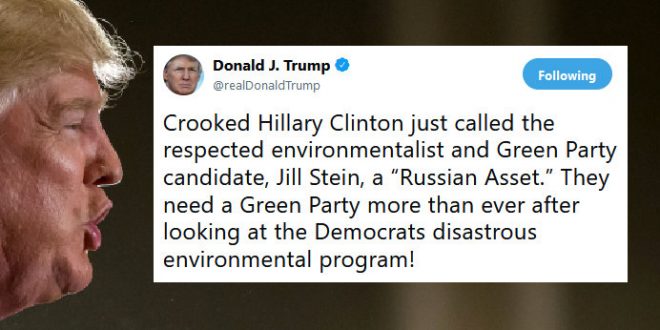 President Trump lashed out at the Democratic Party and Hillary Clinton on Saturday, quipping that Democrats “need a Green Party more than ever” after Clinton suggested that the third party’s 2016 candidate for president was a “Russian asset.”

In a tweet, the president weighed in on the ongoing controversy sparked by Clinton on Friday when she suggested that Stein was working on behalf of Russia or to aid Russian election interference efforts during her 2016 run for president. Stein has been blamed for winning votes that otherwise could have been won by Clinton.

In his tweet, Trump referred to Stein as a “respected environmentalist,” words of praise that come despite Stein’s own frequent criticism of the president and his administration.

Crooked Hillary Clinton just called the respected environmentalist and Green Party candidate, Jill Stein, a “Russian Asset.” They need a Green Party more than ever after looking at the Democrats disastrous environmental program!

Note: Clinton didn’t say she was a spy, but an asset. You can launch a spoiler run without having to spy on anyone. The Russians got their own people for that. https://t.co/XfjfEyP6Ij

HRC’s rant is exhibit A for how the establishment is using the new Cold War to crack down on dissent & feed the war machine. Instead of addressing the crises working people face, they’re painting progressives as the enemy. It’s as if they’re trying to lose to Trump again. https://t.co/h3SYb3HBNs

In light of the latest slanderous allegations from @HillaryClinton, I challenge her to a debate. It’s past time to give the American people the real debate they deserved in 2016, but were denied by the phony DNC/RNC-controlled Commission on Presidential Debates. https://t.co/OvvEjJ9sMx