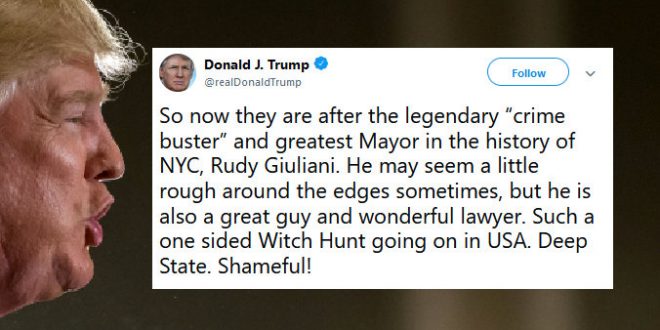 The gesture of support comes as new reporting confirms that Giuliani’s interactions with recently arrested associates Lev Parnas and Igor Fruman, specifically related to the Ukraine pressure campaign, are the subject of a criminal investigation. In a less supportive move, Trump also declined to say if Giuliani is still his lawyer when pressed by reporters Friday.

So now they are after the legendary “crime buster” and greatest Mayor in the history of NYC, Rudy Giuliani. He may seem a little rough around the edges sometimes, but he is also a great guy and wonderful lawyer. Such a one sided Witch Hunt going on in USA. Deep State. Shameful!

The irony is that Trump is falsely accusing the “deep state” of what he himself has done publicly at his rallies, in Ukraine and in televised appeals to China: urging politically motivated investigations of opponents. https://t.co/q5dLyWs0r0

Rudy Giuliani may be the designated fall guy, but this impeachment inquiry is laser focused on Donald J. Trump. No matter how many other scumbags go down with him, those guys are just the extra toppings.

So, who’s they? Your Justice Department?